We’re back! After nearly four years away from Lobster Roll Chronicles, its finally time to embark on a follow-up expedition to seek out the best lobster rolls in northern New England.

This time, we’re starting in our old stomping ground in Portland, ME. Scales opened less than two years ago, and is now under the watchful eye of two co-chefs who, according to staff, have a wonderfully complementary working relationship. With a poured concrete bar that has a built-in oyster sluice, you can’t go wrong banging out a dozen Pemaquids or Damariscottas at the bar, but don’t stop there. 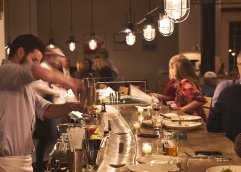 On a whim, we decided to take the LRC out of the barn, and review what, on the surface, appeared to be a fancy-dressed traditional roll. We couldn’t have been further from the truth. The Scales lobster roll is disguised to look like you fancy uncle’s traditional roll, but nested in an in-house baked and perfectly browned split-top roll, this roll successfully combines the two warring factions of lobster roll-dome. Sweet, warm hand-picked lobster meat is first bathed in a brown butter, so good it is guaranteed to turn the heads of the most ardent cold roll fans. But then, this roll it is topped with a home-made chilled aioli mayonnaise that Hellmann’s fans will find exotic, but Cain’s fans will find hauntingly familiar.

Now, is it possible we’ve been away so long that we’ve lost our ability to rank this roll with previous lobster stars? No. We know what we’re doing, and this lobster roll from Scales is one of the best you’ll find, so long as you remain open to the warm-cold combo (which is better than you probably think). At $23, this roll isn’t cheap, but the accompanying fries were perfection, rounding out the value proposition. We give Scale’s roll a HIGHLY RECOMMENDED rating! Here’s how Scales stacked up (0-100):

This is our snap of the Sales Lobster Roll. Check out the Scales website for other images. 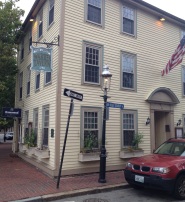 After a long day of hiking around Boston, we decided to stop into The Warren Tavern for a beer and a bite. We noticed they featured a lobster roll on their menu, so we decided to give it a try. Dating back to 1780, The Warren claims to be “the most historic watering hole in America” and “the oldest tavern in Massachusetts.” It definitely feels old, and at least initially had a really cool revolutionary-era atmosphere. But, after being greeted by a less-than-friendly hostess and looking around a bit whilst we awaited the arrival of our server, we realized that the decor feels more like 1970s Pewter Pot than 1770s revolutionary America.

Whether or not the history is true or accurate, one thing’s for sure – George Washington and Paul Revere did not frequent The Warren because of their lobster roll. Our rolls arrived in a small split-top New England style hot dog bun that was splayed open as flat as a piece of bread. (Hey Warren, how much do those little paper hot dog roll sleeves cost?) And, although one side of the roll was butter-grilled, warm and crispy, the other side was cool and soggy. Oh, and the bun was lined with some shreds of iceberg lettuce.

Worst, though, was the lobster meat, which was tough and didn’t taste fresh at all. I asked our server if the meat was frozen, and she insisted that they get fresh deliveries every morning. Well, if that’s true, then The Warren should really consider changing suppliers. Or, maybe these “fresh deliveries” don’t come on Sundays. And adding insult to injury, this tough lobster meat was over-mayo’d, and was flecked with chunks of chopped celery.

The Warren Tavern lobster roll very nearly landed themselves in our Hall Of Shame, along with other substandard rolls from  The Lobster Dock, Neptune Oyster, and Charlie’s Kitchen. But in the end they averted the shameful designation.

We were rooting for you, Warren Tavern, but in the end you ended up with a NOT RECOMMENDED rating. Here’s how you stacked up (0-100): 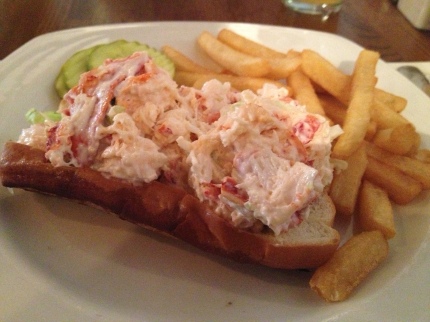 The Warren Tavern’s lobster roll in NOT RECOMMENDED.