Anyone who’s visited Cape Ann has likely driven by The Lobster Pool in Rockport, MA. Traveling counter-clockwise around the island, the Pool is just past Halibut Point, at the bottom of the big hill, on the right after the bend. This shack is always jammed, and we’ve heard loyalists claim it was the best roll around. So, we figured why not choose The Lobster Pool to kick off our 2013 Season.

This place is right on the ocean, with clear views of Coffin Beach, Crane Beaches, and Plum Island beyond. Lots of picnic tables and a lawn leading down to the water provide a very nice setting (although the lawn was off limits during our visit – re-seeding, we assumed). A sign on a dinghy-turned-planter announced nightly campfires and s’mores — a nice touch. Inside, this is an authentic shack with an eat-in-the-rough feel and lots of lobster paraphernalia, including a live lobster tank and a swag section where you can buy Lobster Pool sweatpants if you should have a sudden urge to look like a tourist. The dining room features large windows so less-hearty souls can enjoy a splendid view of the Atlantic. 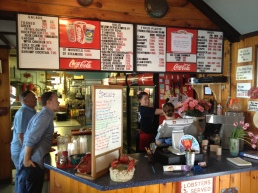 We ordered two rolls and sat tight as they were made to order. When the counter girl called our number, we took our tray outside and grabbed a seat at a picnic table. The place was bustling, and we were lucky to get a seat. Proximity of the seating area to the car park was the only downside… that is, until we tried these rolls.

These lobster rolls were small. Although we typically don’t talk much about price (unless something is out of whack), and in this case  $17 for a small split-top hotdog roll unworthy of a Fenway Frank was a poor start to the experience. The lobster meat was good, but there was absolutely nothing special about it. It was lightly dressed in what well could have been low-fat may (we’re not saying that’s with they use, only that that’s what it tasted like). And, the role itself was apparently toasted dry, not grilled, and without even a hint of butter. A few random shreds of lettuce lined the bottom of the roll, solidifying the absolute mediocrity of the experience.

The only way was can describe this experience is that this roll was not bad. Nor was it good. It was completely neutral, utterly unmemorable, and not at all worth the price tag — even with the view. We’re going to award The Lobster Pool with an ACCEPTABLE rating, although it’s on the low end of the scale. In fact, the only reason whey they pull ahead of Roy Moore’s lobster roll is because they were made to order. Here’s how they stacked up (0-100):

The Lobster Pool can be found 325 Granite Street in Rockport, MA.  WEBSITE: http://www.lobsterpoolrestaurant.com/main/index.php. PHONE: 978.546.7808. Check their schedule, as they are a seasonal business.

The lobster wasn’t bad, but this roll was small, unmemorable, and over-priced.