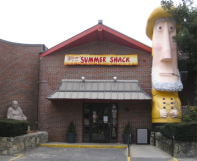 We broke two rules by including Jasper White’s Summer Shack in the Lobster Roll Chronicles. First, Summer Shack is technically a chain, which we tried to avoid for this project. Second, we included a roll that we considered non-traditional. This roll had crunchy things (cucumber?) and herbs (tarragon?). Our excuse: We were on our bikes, we were hungry, and we thought, “What the heck… it’s Jasper White.” We actually came close to not including it in our rankings, but hey… we paid for it, we ate it, and we rated it. So here you go.

Summer Shack resides in the old Aku Aku, and we found a preserved Polynesian mural featuring a combo platter of Easter Island and Hawaiian images, instantly endearing us to the place (perhaps our next “Chronical” will be tiki lounges!). But it also feels a bit like the gymnasacafatorium you remember from grammar school, with hard walls, high ceilings, and an airplane hanger-like feel to it. Summer Shack really is not a very warm place.

We sat at the bar and placed our order. What we got was lobster rolls that were okay. They weren’t terrible or offensive in any way. But they weren’t great, either. A toasted roll layered with a bit of greenery, a very wet, over-mayo’d role with cukes or some other crunchy things was fine. Really. It just wasn’t anywhere near the level of roll we’d come to expect.

In honor of Thor Heyerdahl, we’re not going to beat up Jasper. We’ll rate the Summer Shack’s lobster roll as ACCEPTABLE. Here’s how things stacked up (0-100):

Non-traditional, but not terrible. Definitely not our favorite.