Yankee Lobster Company is located in the Seaport District, right next to the Bank Of America Pavillion. A staple of the South Boston waterfront since the 1950s, Yankee Lobster regularly appears on various best lobster roll lists. We had never been, and had been looking forward to our visit for some time. We arrived at noon on a Sunday, and were surprised to see the place hopping. This felt strange, as the surrounding area is primarily commercial, and on a Sunday this part of town really does feel like a ghost town. But, here we were, happily waiting in line, having been lucky enough to snag the last remaining open table. We waited about ten minutes for our made-to-order roll, while admiring all the history hanging on the walls. Generally, the place felt pretty good. We noticed there was a 50-50 mix of tourists and locals.

This roll is not large. The roll itself is a standard split-top hotdog roll which was toasted but devoid of any buttery taste. The lobster meat tasted fresh, but was actually quite dry. It’s unusual to hear us say so, but this roll could have definitely benefited by a bit more mayo. And, although we are pretty firmly entrenched in the anti-celery camp, the celery that came in this role was diced so small, it really didn’t distract from the overall experience.

What did distract from the experience, though, was an nearly complete absence of taste. This roll completely lacked a buttery bottom. There was no zip or tang typically provided by mayo (or, God forbid, Miracle Whip). We weren’t even provided with the gratuitous lemon wedge. We will say that Yankee’s coleslaw and crispy fries were actually pretty good. If only the roll itself could have held up its end of the bargain.

In sum, we were pretty disappointed by our visit to Yankee Lobster. We’ll award their lobster roll with an ACCEPTABLE rating, but that’s only because we don’t really have a BARELY ACCEPTABLE rating. Here’s how they stacked up (0-100): 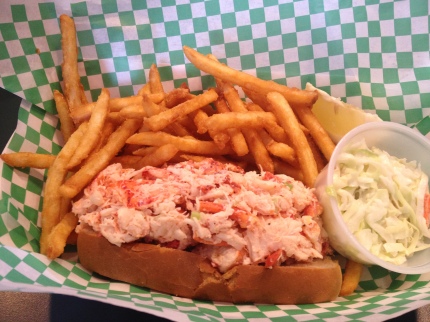